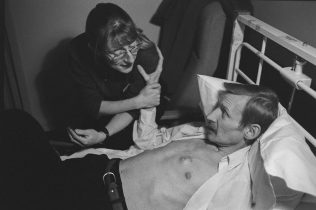 The medical profession was faced with patients presenting with numerous AIDS-related conditions that the health service had rarely encountered before, and for which treatments were unknown. Experimental and invasive treatments were prescribed, often under pressure from a desperate patient community, in the hope that something would save  or prolong patients’ lives.

A typical day in the life of an HIV ward Sister in the 80s might start with having to send agency nurses off the ward because of their fears of “getting AIDS”.  She would then be supporting the ward team concerned as a critically ill patient was being refused access to intensive care.  Next, she would be supporting a young man to understand that there is nothing more that can be done for his partner, knowing that he too is HIV positive and facing the same fate.  After a long and difficult day the ward sister calls in to a patient’s home to change his wound dressings because the district nurses refused. On the way home in a taxi, too tired to walk, she mentions where she works, the taxi driver tells her to get out, she walks the rest of the way home wondering what will be waiting for her tomorrow.