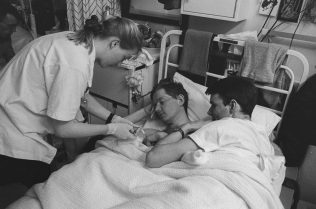 Healthcare workers faced their own challenges

For those healthcare workers who found themselves involved, or chose to become involved, in this new specialty, experiences of discrimination were not uncommon. Healthcare workers reported that their own family members would ask them not to work “on those wards”, “what if you get HIV from the patients”.  Personal relationships suffered.  One nurse reflects that if she did not know people well, she would not tell them what type of nursing she did, fearful of their response.