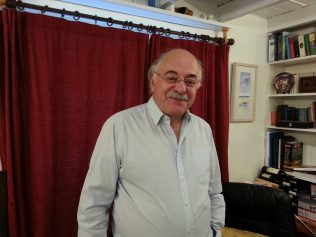 Tony was an HIV Consultant. He talks about the informal support networks that grew up amongst patients, across specialties, in his care.

“There was also a very nice aspect to having mixed clinics, which came up at my clinic in Barts, which was explicitly a mixed clinic, particularly including people with chronic fatigue syndrome or ME, and, and the AIDS patients.  And, they would often be all there on the same day.

And, there was one time when I had been seeing an ME patient for years, and, and I said, ‘Look, I think you know really all I can guide you on; you can always come back if you need to, but I don’t think you need to come every year any more.  You know, you’re on top of this, and you know what to do. And her face sort of fell, and I said, ‘Well no, you can always come back.’ ‘No,’ she said, ‘it’s not that. [laughs] It’s not you.’ She said, ‘It’s the boys.’   And I said, ‘The boys?’

And what emerged is that, out in the waiting room, there was a group of gay men for whom she had been the mother figure and had looked after them all, and some of them organised their appointments around hers, and she was running her own [laughs], in effect, little clinic in the waiting room. Just, you know, lovely, nice, social supportive relationship.

She wasn’t just coming to see me!

And you know, suddenly I became aware of something completely else going on, they weren’t just coming for me.”